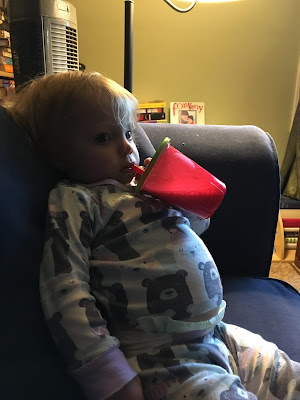 We said goodbye to the bottle tonight. Which means no more baby bottles in this house ever again! We’ve been getting rid of baby stuff for a while now. In March we donated/sold the stroller, baby car seat, high chair, and play pen, and I’ve been happily ditching a bag or two of baby clothes every few weeks. I haven’t felt sad or sentimental about any of it. I love getting rid of stuff (I am married to a hoarder, after all), and I do not miss the baby stage since I found it so damn hard. But something about the end of the bottle gave me pause. I had such trouble feeding both of them, from my breastfeeding woes with Declan to Ophelia’s failure to gain weight, that the bottle has been a huge focus in our lives for over four years.

When Declan was our only child, I never understood all of the parents bemoaning how quickly time was passing. I just didn't feel it. Once Ophelia arrived, however, all of that changed. Time now flits away without a care and I feel like I'm missing everything (like March, for example. What on earth happened to March?). Declan is now four, can hold his own in any conversation, and we'll be touring schools for him this time next year. Ophelia is barreling towards her second birthday and has enough attitude for six toddlers. After our initial fears about her lack of speech, her language has now exploded, with NO followed by a loud raspberry and the dramatic throwing down of anything within her reach being her favorite form of communication. (She even said no to a donut yesterday, before finally conceding to taste it and then devouring the whole thing while glaring at us as if we'd somehow tricked her.)

I worry that I'm working too much, that we're not DOING enough, but then we try to go to the park (the PARK forgoodnesssake) and everyone melts down after 20 minutes (including me) so we come home and watch TV instead. Daycare was unexpectedly closed yesterday, so we spent an extra day with the pair of them and it just about killed us. Declan was even super well-behaved, but that didn't mean he stopped talking for one single second. I mostly want this age to last forever because they're so freakin' cute together, but then I would also like everyone to sleep and use the potty and not require fruit-snack-bribery just to come in the house from the car without a fit (I'm looking at you, Ophelia). Keep my children small and cute and loving me always, but bring on independence and rational conversation. Oh, the contradictions of parenthood. ♥ 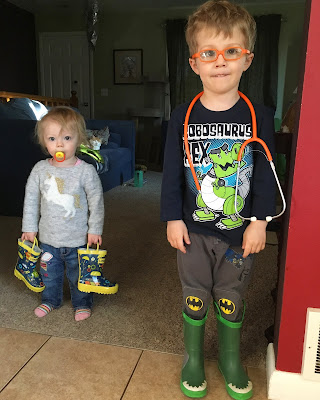