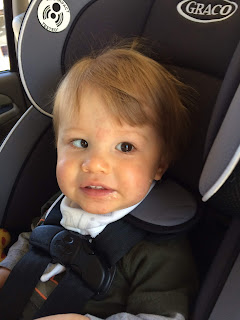 Declan and I visited the optometrist today. We've been noticing for a few months now that he has a tendency to cross his eyes. Both eyes occasionally slide to the center, but the right more than the left.

The doc said that this was caused either by overly tight eye muscles, which might require surgery, or by farsightedness. She put some drops into his eyes to relax the muscles, then used a retinoscope to shine a light in his eyes and take a look at the reflection off his retinas. She determined immediately that he is farsighted - severely in his right eye and moderately in his left. Farsightedness results from the eye being too short: 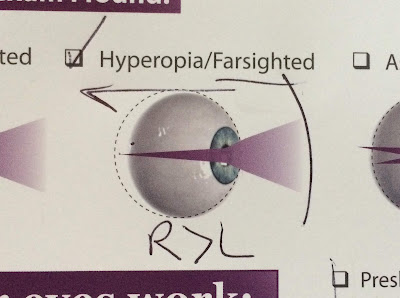 The good news is that as he grows, his eyes will grow too, and the problem will hopefully reduce. However, since the right eye is so much worse than the left, it is unlikely to go away completely (if the right eye grows enough to correct the problem, then his left eye will likely be too big and become nearsighted). 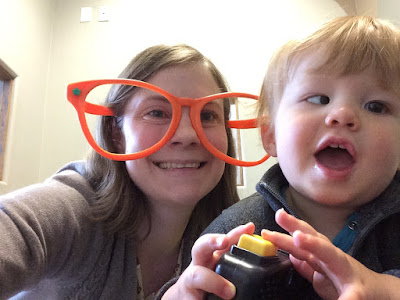 Long story short, the boy has to wear glasses! If we did nothing, then eventually his brain would stop paying attention to the right eye - giving him a permanent lazy eye. She was able to determine the exact prescription for each eye by holding up lenses while using the retinoscope and seeing which one neutralized the refractive error.

We pick up the glasses in a week or so. I'm to try to get him to wear them (ha!) for three days. If I fail, then I can take him back for some "magic drops" that will relax the muscles in his eyes and (I believe) blur his vision so that he has to wear the glasses to see. 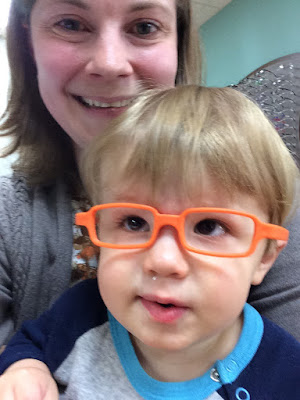 Apparently this issue is genetic, though we haven't yet determined whether Goodlanders or Baths are to blame, since both Christian and I have perfect vision and there are no examples of farsightedness on either side that we know of. We wondered if it had anything to do with his torticollis/plagiocephaly, but she said not.

I'm struggling a lot - as I did with the helmet - that my child is not "perfect" (he also failed a hearing test in his right ear the other week, so we go back in for follow up on that soon). I'm particularly unhappy that the glasses may be something that he needs forever. However. I'm trying my very best to count our blessings; He's happy, he's healthy, he's freakin' adorable, and this is an issue that can be easily addressed. Plus, orange glasses are cool.