January 29, 2019
I was complaining to a friend yesterday about Declan refusing to wear a bib. She said "you know you get to win sometimes, right?" That stuck with me. I like to win, but how do you really win with a toddler? Consider the following and tell me which are the winning scenarios...? (Now, if you're a good parent you will tell me that my relationship with my kid shouldn't be about winning or losing. Yeah yeah, you don't know me at all. Everything is about winning or losing.)

One: Declan doesn't want to wear clothes. I could a) send him to school without a shirt in the middle of Idaho winter or b) force clothes on him which involves screaming, biting, kicking, and punching. Which is the win?

Two: Declan doesn't want to eat anything other than muffins for any meal ever (except at daycare, where he eats almost anything, which is both reassuring and annoying). Do I a) try to get him to eat something else even though he might then scream and/or whine for at least the next hour ("trying to get him to eat" involves placing the food on his table. I don't try and force it in his mouth. That doesn't go well), or b) give him the damn muffin, eat my dinner in relative peace, hope he eats a piece of fruit with it, and then clean up the squashed muffin that ends up EVERYFRICKINWHERE (he won't wear a bib, remember?)? Neither of these is a win.

Three: Declan refuses to drink his bedtime milk from anything other than a bottle. If I even go near the cupboard with the sippy cups at milk time he has a complete meltdown. I could a) give him milk in a cup, live with the freak out, and not worry about him not getting any milk (remember that he just had a muffin for dinner) or b) give him milk in a bottle and worry about weaning him off it at some undetermined point in the future, maybe when he's eating more than just muffins. There is no winning here. Both involve ridiculous levels of mum guilt.

Four: Declan needs constant activities and stimulation. He goes stir crazy if he has to spend even one full day in the house without any craft projects or outings. If we are in the house, then one of us needs to be reading to him, playing with him, or otherwise engaging with him if we're trying to keep the TV off. But I know that I'm supposed to let him 'be bored,' and that he's supposed to learn to entertain himself. Uh huh. Not sure how to win here. Engaging with him, going on outings, doing craft projects - all of these are both fun and exhausting, but the TV always ends up going on when we need a moment of stillness. I think Peppa is the real winner here.

I could go on, but I think you get the point. Life with a toddler is a constant battle between doing what we think we might be possibly maybe supposed to be doing and doing whatever will stop the whining. And we only have one kid. You people with multiple children are my heroes, especially if your kitchen floor is clean. 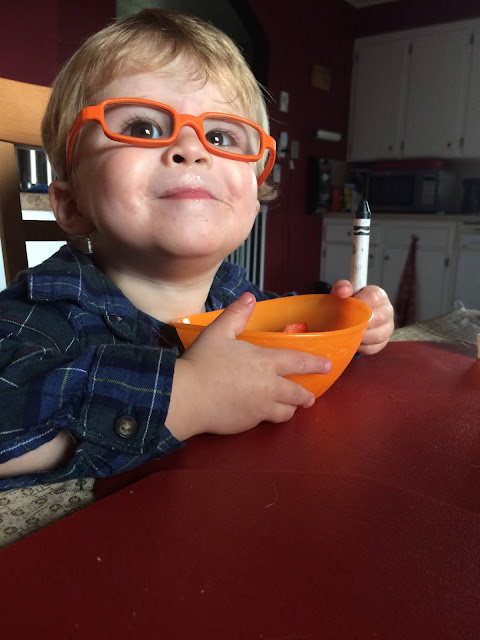