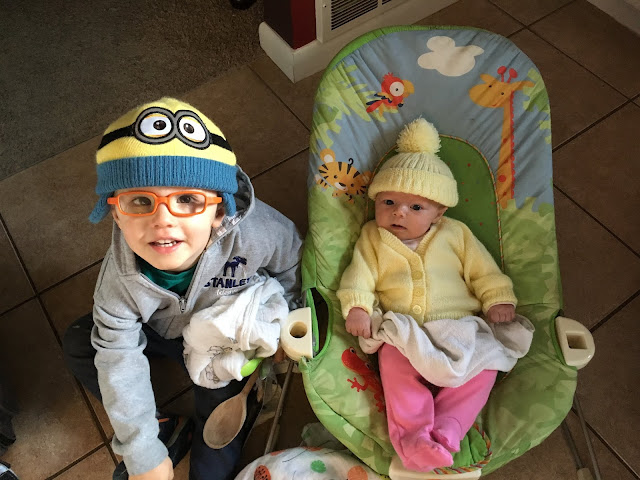 It would be great if you could experience having two kids before you have the first. Oh, the things you would then appreciate when you just have one! I had no idea!
Ophelia is a million times easier than Declan ever was, but I'm still finding it hard. Breastfeeding only lasted a month. I've had days full of tears-for-no-reason. I dread putting her down for the night because it can take forever. I simultaneously can't wait for the newborn days to be behind us, while realizing that once they're gone they'll be gone forever (we are two and DONE). I also do not want to hasten Declan's growth even a little bit since it's already moving too quickly and he's so much fun right now. I wish I could freeze him at this age until Ophelia is a year old, then move things forward again. :)

Some things are definitely easier the second time around. I used to obsess about Declan's naps - I don't worry at all about Ophelia's. When the darkness does hit me, it's not quite so dark because I have Declan as a permanent reminder that this too shall pass. I'm less worried when Ophelia fusses (though admittedly she fusses a LOT less often than Declan did so this isn't difficult). I'm not concerned about her starting daycare. I know that she WILL eventually sleep through the night. Christian and I WILL get some of our evening time back. We WILL be able to go out as a family again without an excess of planning and hassle. Is it easier to the point that we would ever consider another? Nope nope and nope. I'm 38 forgoodnesssake.